During our recent three day stay in Mexico City's Colonia Roma, we ate at several places.  Some were worthwhile, others less so. It would require too many words to describe them all. So I will offer an over lightly survey of the highlights.

We again stayed in the Hotel Embassy, an excellent value at a good location, on the northern edge of Colonia Roma, a short walk to the Avenida Álvaro Obregón corridor or the Zona Rosa.

Around the block, on Calle Orizaba, at the northeastern corner of Plaza Río de Janeiro is the Cafe Toscana, where this time we stopped briefly once for a coffee.

Monday 8 July, our first afternoon back in Mexico City, we had the prix fixe lunch at Macelleria Roma. It was $140 pesos for soup (a light minestrone), a small dish of "Carpaccio" de Calabazas (which seems to be the latest trendy dish) and Marsala de Pollo, with dried mushrooms, sun dried tomatoes and a small side of pasta. Lunch included very good limonada or naranjada, plus our choice of some excellent ice cream. The chocolate ice cream was dark and intense. Macelleria is one of the best restaurants to open in Colonia Roma in some time. It merits repeat visits.

Tuesday morning we wanted to breakfast at a humbler place. One is spoiled for choice in the area. In the end we chose Café San Bartolo, on Calle Jalapa. It's on the east side of Calle Jalapa, south of Durango and north of Colima, in a row of three small eating places.  It's small, clean, inexpensive (good, complete breakfasts average $55 pesos. The coffee, however, is very weak.
I had Huevos a la Granja, which is basically a thin, tasty steak and scrambled eggs. Sra. Cuevas had Huevos Veracruz, scrambled eggs rolled up in tortillas, covered with a black bean sauce and garnished with tangy morsels of chorizo.

On Wednesday morning, we had breakfast at the new Roma branch of Orígenes Orgánicos, on the corner of Calle Jalapa and Calle Colima.
It's kind of a youthful, Oh So Green hip place, but the juice combinations and the café Americano will put the zip back in the old folks. The breakfasts, judging from what we had; a large bowl of fresh fruits, yogurt and granola; and a plate of bright yellow eggs, scrambled with fresh spinach and panela cheese, were very generous.

Breakfasts $70 -$100. Juices about $46. There is also a small store offering organic foods and I have to mention, a couple of brands of maple syrup, at staggering prices. 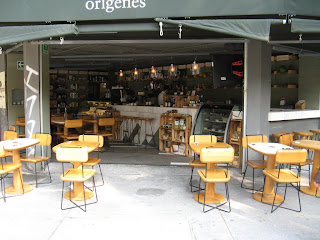 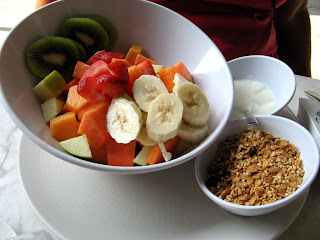 Wednesday evening I was willing to eat a bowl of soup and maybe a sandwich at Cafe Toscana, but Sra. Cuevas desired something more interesting. I had a candidate for that request: Restaurante Yuban, at Calle Colima # 268. It is only a 10 minute walk from the hotel. I had seen Yuban on the Google Map, but had almost no information or reviews, other than a set of photos on Facebook. We only knew that it was comida de la Sierra Norte de Oaxaca.

I don't know how long Yuban has been in business, but I suspect not long.

It's a large, oddly angled space with several decors. We chose to sit in the very rear of the dining rooms by a potted nopal cactus. Our waiter, Hector, brought us a trio of salsas in cazuelitas, and a small dish of thin, crisp tortillas lightly anointed with asientos. (Pork fat renderings. I couldn't detect any distinctive taste of the asientos, but the salsas were bodacious.)

We ordered a couple of craft beers: Sra. Cuevas had a nice, non-soft drink Ginger Ale and I had a Bitter. Mezcales are a feature of the restaurant, but we didn't try any.

We proceeded slowly and discreetly in ordering. We began with soups. Sra. Cuevas had a Sopa de Garbanzos con Hierba Buena, very good, indeed; I erred in getting a murky, unattractive Sopa de Guias. My soup was not to my liking, with tangles of nondescript greens in a cloudy broth. Doña Cuevas rather liked it, so we switched, to our satisfaction.

We moved on to our next courses. Sra. C. chose a light course: an attractive salad of sliced heirloom tomatoes dressed with a light vinaigrette seasoned with wild orégano. 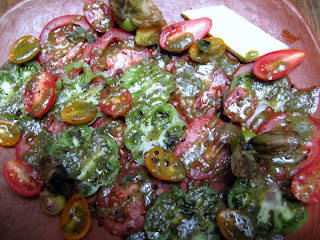 I had a mole amarillo (described as an "amarillento" (spelling?) of wild seasonal mushrooms. This was quite good, in spite of its less than attractive appearance. The downside was that the slightly picante mole was so thick as to obscure the individual mushrooms. The upside was that it tasted good, with a distant resemblance to a curry. Other vegetables supported the mushrooms; chayote, nicely cooked green beans and a notable, slightly bitter squash. 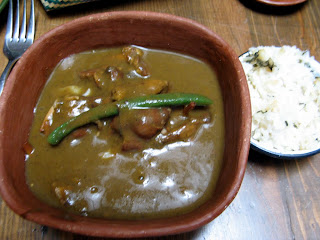 Our big error was succumbing to a recital of desserts without asking the prices. My dessert experiences have generally been disappointing. At Yuban, we had two purported creations of pan de elote (corn cake).

Mine was supposed to have flan as an element, but it was undetectable. Sra. C. had what turned out to be a nice, very generous wedge of cheesecake, made with sheep's milk. Each dessert was priced at $100 pesos. Excessive, in our opinion. One dessert was really enough for two, so that mitigates the price somewhat.

We also had café de olla, which was remarkably insipid. In conclusion, the meal had a number of weak points and a couple of highlights.

Service: ***1/2  Closely attentive service, maybe a bit too close. I couldn't put down a squeezed lime wedge or a crumbled napkin without Hector picking it up. If you enjoy having the provenance of each food described to you, you would like this place.

Rest rooms: Picturesque and worth a visit.