Avenida Cuitláhuac, Clavería, Delegacíon Azcapotzalco, México, Distrito Federal:
Place names that roll off the tongue, a area of Mexico City far from the trendy bistrots of Condesa and Roma and from the stalwart, old time restaurants of the Centro Histórico.

We had dined last year at the deservedly famous El Bajío, but had since read good things about Restaurante Nico's Mexico*, less than half a mile further up Avenida Cuitláhuac, in Colonia Clavería.

*There's a branch of Nico's in Querétaro also.

Nico's has been operating since 1957, and although it offers distinctive regional Mexican dishes, its look and feel are very different than that of El Bajío. El Bajío is festively decorated with artesanías but Nico's is more serious, with a sober decor of beige and brown walls. Nico's has gravitas. Nico's emphasizes that it obtains raw materials from small producers. It's also a founding member of the Slow Food Movement. At Nico's your attention is focused on the plate and the food, and less on the surroundings. We enjoy both El Bajío and Nico's, but what we ate at the latter gave near perfect pleasure.

I'd made a reservation through OpenTable.com, which was easy, yet we had a minor kerfuffle when we arrived. We were shown a table by the door to the kitchen, and when we requested another, it seemed all others were reserved. Despite its modest capacity, Nico's dining room fills everyday except Sunday, when it is closed. However, when I belatedly gave the head waiter our OpenTable confirmation number, they found us a more suitable table.

For openers, a Tequila and mezcal cart was rolled beside our table. Unless you already know a lot about these spirits, making a decision is difficult. Our waiter offered me  a taste of a Mezcal Amores, which I liked very much, so I chose that. It was smooth and smoky.

The menu is somewhat dazzling. It begins with a list of the seasonal and daily specials. That is only the start. 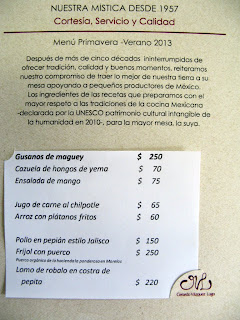 We passed over the specials sheet and moved to the Entradas.
I chose Marlín En Frío and our amiga, Luz Ma, had Chile Mihuateco Relleno de Trucha Ahumada. Doña Cuevas skipped the appetizers, but had a Sopa de Frijoles en Caldo de Ayocote for her next course, as did Luz Ma.

The Marlín Ahumado was unlike any I'd had before. It was a brilliant presentation of thin, translucent slices of smoked marlin lightly dressed with olive oil of Ensenada, lime juice, parsley, and salt smoked over copal incense.


The Chile Mihuateco Relleno de Trucha Ahumada was richer looking. I didn't try it, but Luz Ma enjoyed it.

My companions both chose the Sopa de Frijoles for their main course, and I selected Caldo Verde de Camarones Rocas. The nicely garnished Sopa de Frijoles was both hearty and tasty. The Caldo Verde de Camarones was tart and slightly picante. I liked the soup, but the shrimp were impeccable.
Sra. Cuevas chose Pollito de Leche Estilo Barbacoa de Hidalgo. Very good, but a bit of a bother dealing with the many bones in a small, whole bird. The accompanying Frijoles de Olla were very good.

I had another mezcal and a plato fuerte; Cerdo en Adobo de Antaño. This was a solid but fortunately smallish chunk of tender pork in a delicious sauce reminiscent of a dark mole, but less thick and with a perfect balance of fruit and spice. The baby tamalito was superb. I wish there had been more than one. It came with a cazuelita of wonderful frijoles negros. 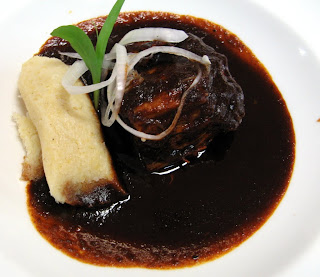 Doña Cuevas and I skipped dessert, but Luz Ma was drawn to an Arroz con Leche that took a few moments to prepare. It came with a cinnamon foam that was very pleasant.

We all had coffee, which was more than acceptable. I consider this meal to be one of the best we have ever had in  Mexico City.


Tat phrase alone was enough to let me know that the place would be expensive -- and, most likely, a great dining experience. It goes on my list for my next Mexico City visit.

I suppose that if your budget were tight, you might bring your own salt and copal, and ask for a light.