A couple of days ago, I was  reading "Felipe Zapata's" blog, "The Unseen Moon", in which he mentions getting roast chicken and its accompanying slaw of a Mexican variety at a stand well known to us as well.

We drove down the highway to a roasted chicken stand and shared half a hen, tortillas and something that is kinda like cole slaw, but Mexicans don’t really know cole slaw. They know tacos.


The kinda cole slaw at that place is utterly simple: shredded cabbage, a few shreds of onion, slices of carrot and a couple of spears of seeded pickled jalapeño. I'm not sure what the dressing is. Could be lime juice, more probably just vinegar. It's nothing to get excited about, but it's a good foil for the delicious, adobo dipped, charcoal broiled, orange juice drenched chicken. When I make slaw at home, I make a modified version of that at the roast chicken place.

The time has come to describe that slaw and how I make it, for the benefit of my loyal readers.

NOTE: this is not a recipe. It is a photo illustrated tutorial.

There are five essential ingredients: fresh cabbage, carrots, salt and sugar and mild vinegar or lime juice. All the rest are optional. 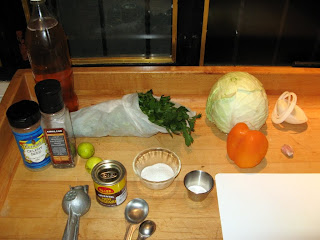 I prefer to buy small to medium sized cabbages in the Pátzcuaro mercado. The best, in my opinion, still have the outer leaves on. Those with the leaves removed have been around for a while.

After disinfecting all vegetables in a Microdyn and water solution, then draining them, we are ready to make the slaw. I assembled the seasonings for this tutorial. I usually not that strictly organized. 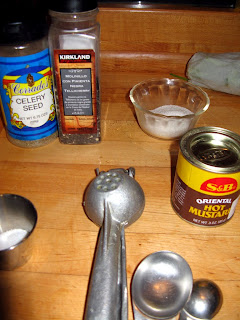 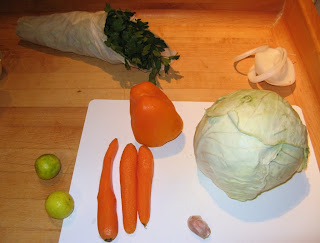 Let's go to technique. After shredding* the half cabbage with knife, mandoline or food processor, I dump it into a large stainless steel bowl.

*Shredding should be distinguished from grating, which is altogether different. 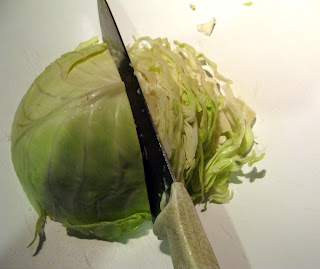 I measured 2 teaspoons of salt and separately, 2 tablespoons sugar. I added about two thirds of each to the shredded cabbage. This was tossed about with a pair of tongs. You could use your hands if you like.

The carrots were peeled and trimmed before going into the disinfectant solution. Now they are sliced into thin discs and placed atop the cabbage shreds. 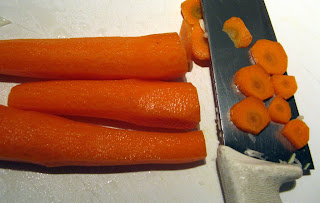 I then cut up the sweet pepper into small pieces and added it to the bowl.

Next, a few rings of sweet onion. This is entirely optional.

Next, a small handful of fresh parsley is chopped coarsely and added to the bowl. 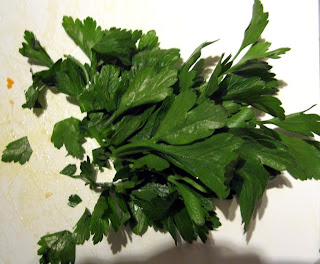 The next step is the seasoning, all optional except for the salt and sugar already applied.

I like a teaspoon of celery seed and a teaspoon of dry, hot mustard powder, or yellow mustard seed, for less piquancy. It's important not to overdose with these two seasonings, as the can make the slaw bitter or too sharp.

Another version uses a clove or two of garlic, which makes the slaw taste more like a NY deli Health salad. We love garlic, but not so much here.

Everything is well tossed together. Taste it, then correct the seasoning. 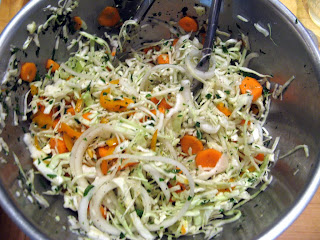 Remove the slaw to a refrigerator container. It will keep nicely for a week, if it lasts that long.

Healthy slaw. No mayo no oil, just fresh, healthy ingredients. (Yeah. I know about the salt and the sugar.)

This works well with purple cabbage also, which may have greater health benefits.

This is pretty much my standard coleslaw recipe. Sometimes i do one with sliced apples, craisins, fennel seed and rice wine vinegar instead of carrots and lime juice.
Since I make out mayo from scratch (it only keeps a few day)I sometimes do a thousand islands type dressing to use up the mayo.
Cabbage is the most dependable green here in Yucatan so we eat a lot of it!
regards,
Theresa

That's how cole slaw is supposed to be made. Mayo and other weird stuff belong as much in cole slaw as a fish head.