Sra. Cuevas' birthday comes soon after our wedding anniversary. So it was that after I presented her with a list of some suggested selected restaurants, she chose Osteria Giotto, in the restaurant blessed town of Montclair. (There are two websites for the restaurant, of which I just discovered the one linked above. The other is here.)

Dinner was to be Saturday evening, and on Friday I called for a reservation. The 6 o'clock slot was unavailable, but there was a table available at 5:30. That was fine with us. Our party consisted of my wife, my mother, my sister and myself.

It's a very popular restaurant, as seen by the nearly packed condition of the dining room. The only negatives, in my opinion, are the elbow-to-elbow placing of the tables and the noise level a little higher than desirable.

But the food, the main reason for dining there, is good to wonderful. There were several recited specials, in the appetizer, pasta, fish and dessert categories. I can't remember but a few. Except for dessert, we stayed with the printed menu.

Our waiter was efficient and businesslike. We were brought a basket of house baked breads and a meager dish of olive oil. But we got more olive oil on request. My favorite of the breads was the crusty loaf seen on top; the focaccia was too soft and sweet, but not unpleasant.

My companions were more restrained than me when ordering. I was the only one to have an appetizer. I was ready for some shellfish, and the impepata di cozze e vongole (mussels and clams in broth) was irresistible. I was not disappointed. The dish, a heap of savory mussels and fewer clams, was perfectly cooked, and spooning up the luscious garlic and wine broth was a primal experience. I could have bathed in it, but propriety held me back. 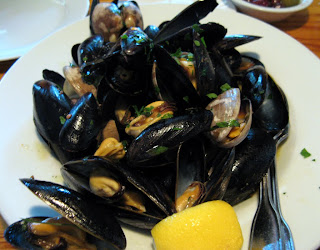 My mother and sister both chose fazzoletti, homemade ravioli filled with ricotta and spinach, in a fresh sage and butter sauce. 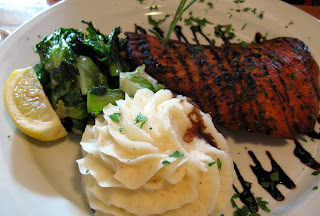 I had decided, long before arriving at the restaurant, that my main course would be rack of lamb with rosemary and roasted garlic. It was cooked perfectly to order, medium rare, and a pool of slightly tart sauce. It also came with the whipped potatoes, whose neutrality was welcome with the rich, tender chops and sauce. The escarole would have been ignorable, if it hadn't been so abundant.

Dessert: my recent history desserts had not been favorable, but Osteria Giotto succeeded in pleasing.

Sra. Cuevas had one of the specials: lemon sorbet on fresh berries, sided by a cloud of whipped cream. 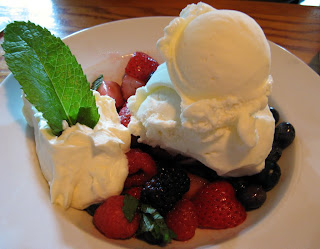 My mother had a simple millefoglie. Berries and cream, again, on the side. 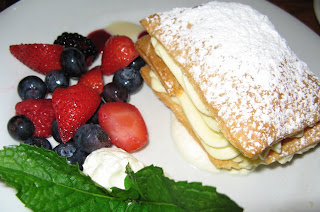 My sister had one of her favorites, a generously sized creme brulee. 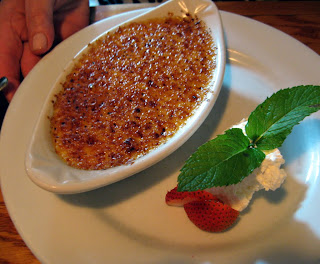 I chose a molten chocolate cake, which had not the most attractive exterior, but was pleasing inside. Yes! More berries and cream. Just for the record, I didn't eat all the cream. There was also a scoop of ice cream and a puddle of superfluous chocolate sauce. Over the top! Not to be repeated on a frequent basis. 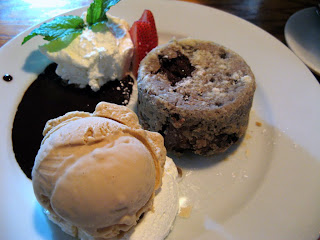 We all had coffee, which was decent if not spectacular.

Price: (We didn't see the check, as we were treated. But my estimate is $$$+ dollars per person.

Rest rooms: Nice, but capacity limited. There were short waits.