I'm not a big fan of buffets, but there is one in the countryside to the northeasts of Oaxaca city that warrants a visit. This sprawling restaurant is an exception to our No Buffets Rule.

We went with our friend, Ms. Bixa, an American expat resident in Oaxaca for many years, and a driving force behind the delightful Web Forum, Any Port In A Storm. Bixa knows the ropes and the dope, so to speak, and so we made sure to arrive early. We took a taxi from Oaxaca's Alameda via some of the M.C. Escherian highway crossovers, where all of a sudden, you are on the "wrong side of the street and traffic going the opposite direction is on your right, except for a few that don't conform.

We arrived early to get first dibs on the chow. Actually, the restaurant was almost empty when we arrived just before the opening bell, 1:30 p.m. so I busied myself in photographing the steam tables, tile work and the fronds of the palapa roofs.


Drink orders were taken and mis compañeras shared a large pitcher of Agua Fresca de Piña while I had a goblet full of mojito.

At almost the dot of 1:00 p.m., the kitchen crew emerged carrying steaming hot pans and soup pots to place on the steam tables.
The variety is dazzling and mind boggling. Of course, with hundreds of soups, salads, meats, and more, some items inevitably are better than others.

This creature dominated the scene.
But there were many other tempting dishes 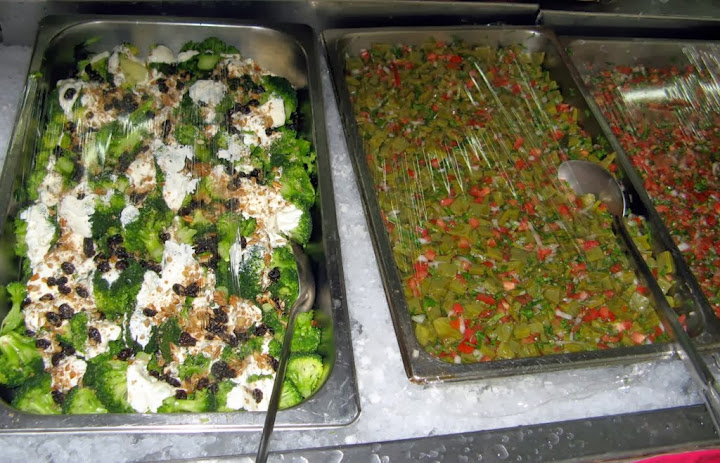 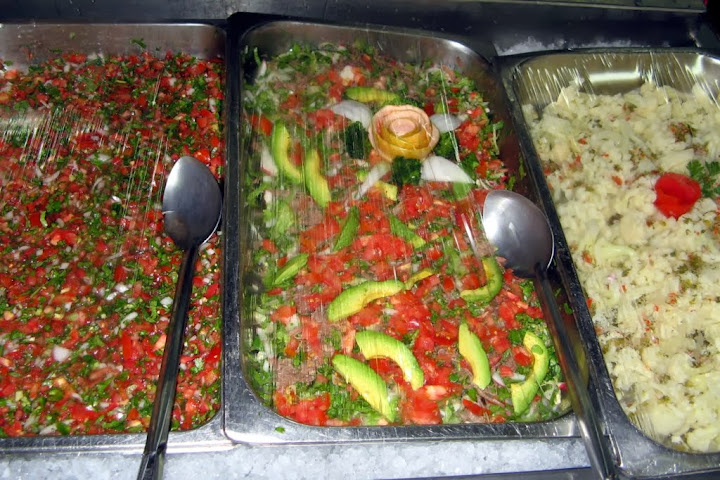 
Various guisados (stewed or braised meats) were offered.
But above all, La Parrilla called to me. 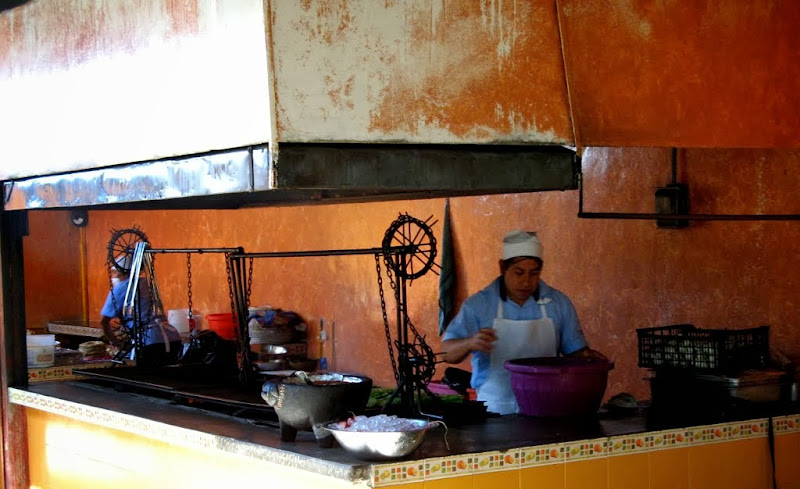 Más cebollitas
I made myself a modest plate of grilled foods.
A tortilla kitchen and antojería stands close to the parrilla area to provide support in case any gaps remain in your satiation.

Although the grilled foods were very enjoyable, I regret that I just didn't have room for any of the moles. But there was room for a small dessert sampler. Desserts are usually the most inferior part of any buffet, but at La Escondida (El Sabor de Antequera) were, um; decent.
I had a bit of napoleon and some pastel envinado (like rum cake). But the best dessert by far was some modest but flavor packed lime water ice. (Yes, they make their own ice creams and ices.)

About the time we finished, a paellera full of paella arrived (what else?) but not only were we too full, the paella had wieners in it.

RATINGS
Food: runs the gamut from meh  to excellent. Overall, ***
Service: Self service but you are attended by servers for drinks, requests, la cuenta.

Price: Base buffet price, $149 pesos adults. Drinks and tip are extra. The drinks are a major expense. For example a pitcher of Agua de Piña-Naranja con Fresas cost $102 pesos.
Our cuenta below. 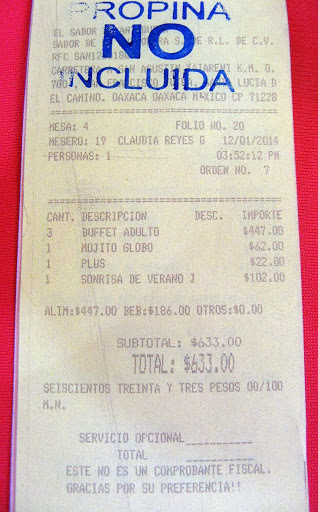 
View La Ciudad de Oaxaca in a larger map
Posted by Don Cuevas at 10:40 AM

The masrhmallow delights and soupy spaghetti sort of overwhelm everything else.

Always look forward to your posts on restaurant finds. I am starting to plan my trip to Oaxaca for the Guelaguetza festival. Looking forward to scouting out and perhaps avoiding (!) some of these restaurants. Enjoyed your previous posts a bout the bakeries in colonia Roma Norte .
Good food is always part of my travel plans.

I like to be able to relate to some of your Mexican food impressions such as the silly salads, superfluous starches, crazy use of hot dogs and the banned ketchup on pizza! In my case I know rice and beans take up valuable stomach space meant for carne asada.

The Mexican friend who cleans my apt. once a week sometimes tries things in our fridge. She once started to eat a bag of frozen lime juice thinking it was a bollo. She tried a piece of pumpernickel bread from a loaf we brought from Tampico and thought it was horrible. Last week she tried a kalamata olive and must not have liked it either because we found the chewed remains on one of our benches!

We know someone else who uses sour cream to make cake frosting, and doesn't add much sugar. And everyone says it tastes good!?!

The whole pig in jugo… at a buffet?

In Ecuador I did see whole pigs, skin...? :0 hanging in outdoor country road stands. They gave you a chop of whatever part you asked for, hominy(mote) added, and a hot sauce on some sort of wax-y paper.

A buffet person as you, I don't prefer, breakfast is ok.