It used be called "home made". Later, it became "made in house". I use the word "craft" or "artisanal" to describe the foods of a small, Neapolitan restaurant in an off center Oaxaca neighborhood. 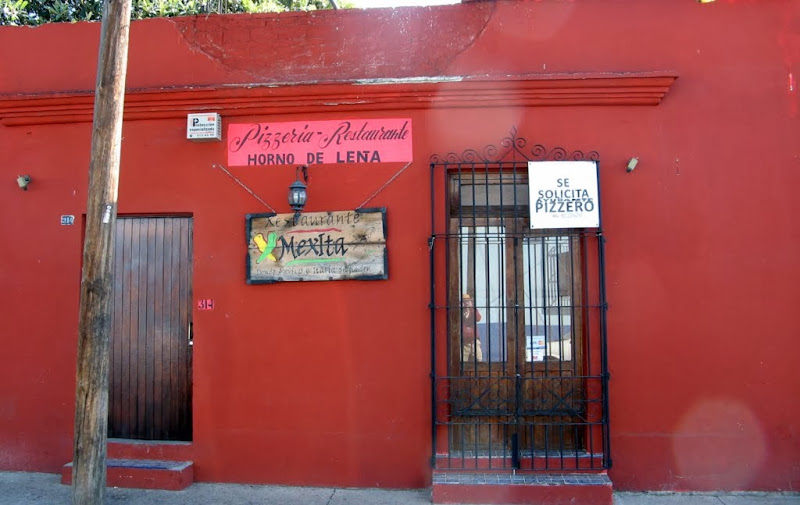 Restaurante Mexita, is a word derived from "México Italia". From what I understand, it was first established in the suburb of San Felipe del Agua. Chef Enrico de Rosa is from Napoli, Italia, and he brings from there skills not often seen in Italian restaurants in Mexico. His wife, whom we did not meet, is a Oaxaqueña.

I had read glowing reviews on TripAdvisor. At that time Restaurante Mexita was in Number One place among Oaxaca restaurants, according to TA members. (It actually still is. TA lists a seafood place in Huatulco, for godssake, as Number One.)

Sra. Cuevas and I went one evening, to have a wood oven pizza and a salad. We also had a bottle of Italian Merlot.

(This meal was immediately after the Fickle Finger of Fate taxi scam incident, so our mood was not at its best. But the wine and a nice meal helped a lot to dispel the dark cloud over us.)

The restaurant has several dining areas. We sat in a semi-outdoors section with a good view of the wood burning oven. The atmosphere is casual and romantic. 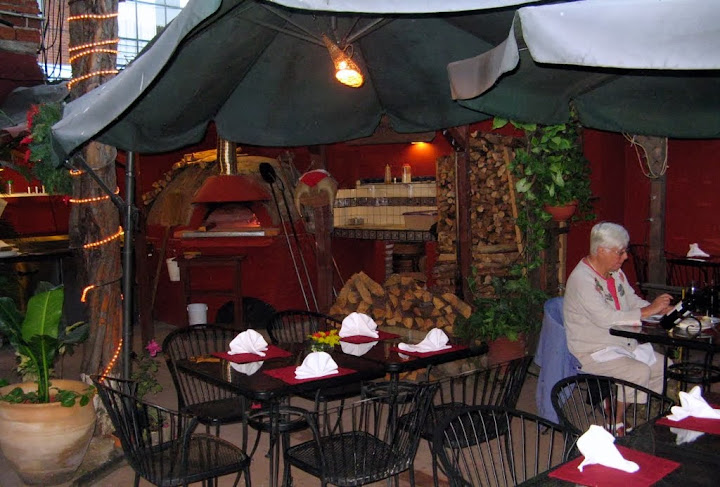 Chef Enrico visited our table to tell us that he makes the vino della casa, fresh mozzarella and ricotta cheeses, all the pasta, and huge loaves of pane contadino. I may have missed something. We were offered tastes of the wine, the cheeses and the bread. I didn't care much for the wine, finding it rough and rustic, but the cheeses were very good and notable for their freshness. 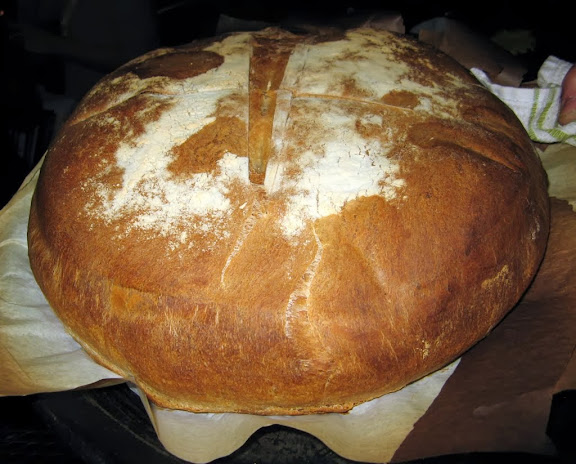 We looked over the dazzling menu and decided to have an Insalata di Arugula e Pere. We chose the medium size, more than enough for two to share. It was perfect; sharp tastes of the greens offset with the sweet, ripe pear slices, a light touch of balsamic vinaigrette, and shavings of Parmigiano Reggiano (I believe) completed a perfect whole. 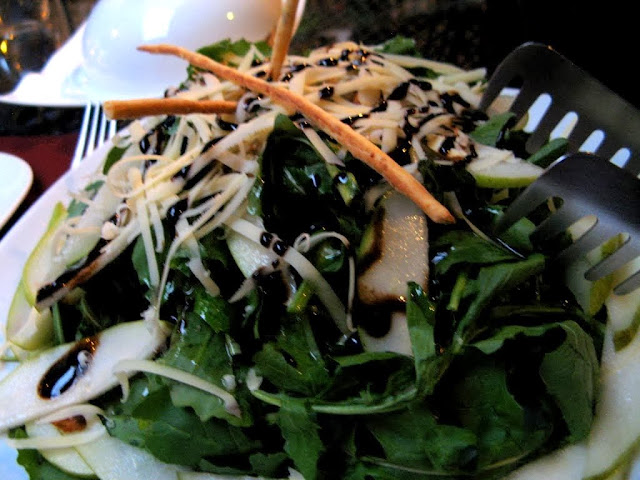 We wanted a pizza that would demonstrate the chef's skill, so we avoided the more complicated varieties. On the other hand, a simple cheese or pizza Margherita might have been too spartan. So, with the advice of Chef Enrico, we chose a Pizza Marina con Alici. Alici, he explained, are fresh (flash frozen), unsalted anchovies. (Who would expect to find such a product in Oaxaca?) 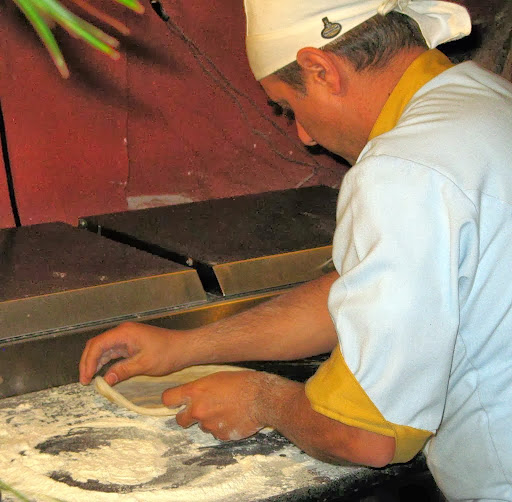 We watched him prepare the pizza in swift, deft movements. The actual cooking time is about 60 seconds, perhaps 90 seconds for a larger, more heavily laden pizza.

It was a beautiful, artfully made, modest sized pizza. It didn't come cheaply, at $190 pesos. The crust was well charred, but flexible, and when Chef Enrico asked us how I liked it, I told him that we enjoyed it, although I do prefer a crisper crust. He explained, that that was made in the traditional Neapolitan manner, but that if I preferred it crisper, on my next visit I should ask for that and he would accommodate me—up to a point.)

For dessert, I had a perfectly made panna cotta, soft and quivering, the best I've ever had. The espresso was very good, also. 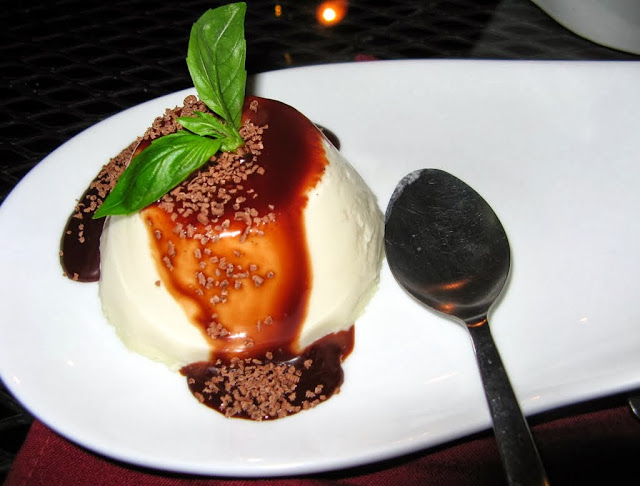 We were attended by a Oaxacan waitress, and occasionally Chef Enrico would come by and explain the provenance, tradition, and other lore of his cuisine, He was amply supported in this task by his justifiably proud father, who works as a host and bartender,  who would check up on our well being and delight at several intervals. (The mamá also works there, but she did not visit our table.) This flow of information was all well and good, up to a point, but eventually became somewhat tiresome.

I wanted to return sometime to Mexita during the remainder of our stay, but we never did. Although I would have been pleased to try some serious platos fuertes, we were somewhat discouraged by the thought of having to undergo the educational program all over again. Then there is the price. This does not come cheaply. Our meal of pizza, salad for two and a bottle of wine cost $687 pesos, including a suggested tip of 10%.

To sum up; Mexita is a very good restaurant, with highly admirable chef skills and artisanal products. But diners should be prepared for the ongoing interaction with the proud chef and his father.

I would return to eat at Mexita when we again visit Oaxaca.

RATINGS (based on a single meal of pizza and salad and dessert!)

Keywords: "Perfection comes with a price"

I have to speak up. I live one block from Mexita and dine there about once a month. I have never had "ongoing interaction" from any employee at Mexita, including the father. I have always had a great dining experience: food prepared with high standards, wonderful ambience, well-trained servers. I think the father reacted to you as you asked questions and were taking photos.

Can we convince him to move to Patzcuaro? The locals need to know what real pizza should taste like......

Joana, thank you for your comment. I think your point is likely valid. We were definitely interested in having input from Chef Enrico, his father and staff, but it got to a point where we were weary of it. And I think it may well have been in part a reaction from the earlier incident to which I linked, unrelated to the restaurant itself. Our energy was already low due to that unpleasantness.

PS: How did you find us here at My Mexican Kitchen?

Tancho, I really liked Mexita, but I must tell you that Cafe Santina in Zihuatanejo is a lot closer to us. Of course, it has no seating and no atmosphere.

I love blogs by residentes temporales/permanentes because I am one too. I've been reading for a couple years. I like your blog because it is primarily on food.
P.S. I hope the father offered you some limoncello.

Ah! So you are not a newbie here. Thanks for reading.

Yes, we had some limoncello. (Had some here, also, yesterday, when we had some old neighbor friends to comida.

I envy your home location. The best "restaurant" here at the Rancho, or in the Pátzcuaro area is our own kitchen and dining room.

It's funny that you write about the wine being bad. Last week I was invited to a dinner party where one of the guests had brought home-made wine. It sucked. In fact, every home made wine I've ever had sucked. I don't know what it is, but I've come to believe that it's nearly impossible to make wine properly unless you have a vineyard and a fully sized, professional operation.

Apparently this observation now extends to professional chefs who also dabble in wine on the side.

A good review, and I totally felt for you when you started to get tired of the ministrations of the owner and staff. That kind of treatment is just like traditional anchovies. A few are nice, but you don't want the whole tin.

Kim G
Boston, MA
Where the meal also struck us as rather expensive for what you got, well outside one of Mexico's big cities.

P.S. I've never had good pizza in Mexico. OK pizza, decent pizza, yes. But never any good pizza. I'll have to try that place the next time I'm in Oaxaca, and pretend I'm deaf.

Kim, I wouldn't necessarily call the wine bad, but rough and rustic, simply not to our taste. Many diners, via TripAdvisor, liked it. Among other bottles, they had available an Italian Merlot for $220 pesos that we enjoyed.

Kim, here are some of my pizza recommendations in Mexico:

Good pizza: Pulcinella, Morelia; great pizza, Café Santina, Zihuatanejo (to go, only); Top toppings, Macelleria Roma, Colonia Roma Norte, Mexico City (although our last pizza there, on a Sunday night was underwhelming.); in years past, we enjoyed Pizza Rústica, on Calle Murguia, Oaxaca, but haven't been there in years. And, of course, Mexita, award for most care and tradition put into the pizze.

Have you seen the NY Times article, "Pizza Is MEH!"? I heartily disagree with it. http://6thfloor.blogs.nytimes.com/2014/01/27/yes-we-believe-that-pizza-is-meh/

Back to Mexita: there's a lot more to their menu than pizza, and if and when we were there again, I'd violate my usual policy of not ordering pasta in restaurants. From what I glimpsed of the menu, there are some extraordinary dishes there for those diners who have the time, energy and money to invest in an extended meal.


I would have taken some photos of the menu, but conditions were not favorable.

I just read that NY Times article. When it's good ny style pizza, there is nothing Meh about it! I like a lot of sauce and a crispy crust, yum.

New Haven pizza can be great, too.