We arrived at our hotel on Friday afternoon at 3:30. The Metro from Terminal Observatorio got us there quickly and cheaply ($3 MXP each).

After checking in, and paying for the first night, we briefly explored the features of our decadent suite. When we recovered our senses, we were hungry. We wanted to eat nearby, and almost nothing qualified better than Tacos Xotepingo, a mere 2 1/2 blocks from the hotel. Earlier, I'd found the place on Google Maps Street View, one of my favorite tools for city research.

Tacos Xotepingo is on Avenida Balderas at Calle Marqúes Sterling. It's a big, new construction. A long grill sits out in the front of the patio section. 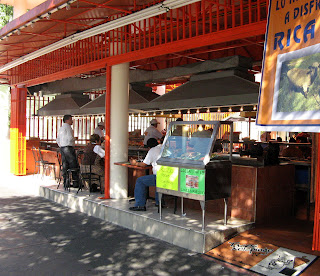 It looked great, and it was pretty good.

The menu runs to 4 plastic laminated pages. How to choose from such a large menu?
Below, just the cover sheet. 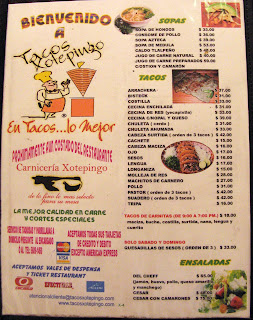 We decided to get an order of 3 tacos al pastor, and one taco de cecina, nopal y queso. Two mugs of draft beer. (This is something we'd not had before in Mexico, although I recall that La Surtidora in Pátzcuaro offers it.)

While we waited for our food to arrive, I looked the place over. Adjacent to us was the tortilla Señora, addressed as "Mami" by the waitstaff. She was constantly busy.

In the larger back salon, a combo played Mexican favorite tunes. They weren't bad, but for that reason we chose to sit in the front, away from the speakers.

The food arrived. The tacos al pastor were good, but we'd had better. These were a bit dry, or, "crisp", if you like, but tasty. The array of salsas helped moisten them. 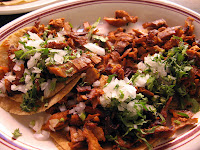 The taco de cecina, nopal y queso was huge: a sheet of cecina (salt-cured, semi-dry beef), the nopal consisted of the whole penca (leaf), and there was ample cheese.

The beer was fine. The scene was lively and colorful.

Conclusion: it's hardly fair to judge a restaurant on the basis of one meal, but I'll give Tacos Xotepingo a provisional rating.

After our meal, we took a brief stroll eastward on Arcos de Belén, past our hotel, just to recon the territory.
There's a Chinese buffet restaurant, Mei Mei, but I have no desire to eat in Chinese restaurants in Mexico. Especially not at buffets.
There's Danny's, a jugos place with hamburgers, and breakfasts, but we never got around to trying it.
Restaurante Mi Pueblita didn't attract me.
Panificadora "La Palmas" looked good, just an old time local bakery, with
a nice display of baked goods. The cheese filled "peinitas" or bear claw danish were ricas. The cuernos had apparently been left to rise at too high a temp, so the points were crunchy and soaked with butter. Oh, Gawd! 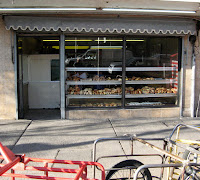 We walked to the corner where we found Rincón de Castilla, which despite its name, is not so much a Spanish restaurant but a Mexican one specializing in meat cuts and cabrito, Having intensively looked over the website in advance, I didn't want to eat there, as the prices were very high. So, with that, we returned to the Hotel Pal for a good night's sleep and ambitions for the morrow.
Posted by Don Cuevas at 10:07 AM

You need to put together a DF dining junket. Sign up about a dozen people and have them pay your way, as the exalted leader!
Thanks for your tireless effort in bring us your culinary adventures.

Gee, Tanch, what a great idea!

But, now that I recall, the tour group came to the hotel had SO many questions. I don't think I have the patience for that.

But, on the other hand, if I had a few true cognoscenti, such as yourself, maybe it would be doable.

Live music in a restaurant is the kiss of death for me. You want live music, go to a concert. You want to eat, go to a restaurant. Don´t mix the two. That´s what I think.

And they expect you to clap!

Felipe, your views on live music while dining are well known, and well founded.

But, IMO, sometimes it's worth putting up with a little harmless entertainment if the food is good.

As you shall see, in the next episode, "Gourmandizing Mexico City Part 4-Las Comidas", it's very difficult to avoid live music while dining. I suppose you can stay in your hotel room and order from room service. And there's always Maruchan in a plastic cup. ;-)

Even the staid Casino Español had a troupe of heart singing estudiantinas making the rounds of their august dining room.

Boca del Río had a small troupe of mariachis playing requests. They didn't play close to us, as no one wanted to pay them for a song.

At Tacos Xotepingo, we seated ourselves in the front patio, so that the musical combo's high energies were muted by distance and a glass partition.

I have to say that all these musicians exhibited a degree of professionalism and talent not often heard at restaurants in Pátzcuaro. The trios of older men with cracked voices and slightly out of tune guitars; and sadder, the kids singing off key while accompanying his song by racking a Coke bottle with a stick. Those are unpleasant and intrusive to conversation and simple tranquility.

It´s not so difficult to dodge live music. For instance, I was gonna try the Casino Español. But now, on learning of their pinche live music, I won´t go there. Thanks for the heads up. Your utility knows no bounds. Really.

"The trios of older men with cracked voices and slightly out of tune guitars; and sadder, the kids singing off key while accompanying his song by racking a Coke bottle with a stick. Those are unpleasant and intrusive to conversation and simple tranquility."
And I thought I was the only one that would be willing to PAY them to get the hell out of hearing range. Today there is only one strolling musician ( one person one guitar) that is almost bearable, the one that sells CD's. Maybe one of these days the kid who howls on the plaza will figure out he can make more money selling Chiclets and be quiet.

By the way, there were no hidden charges at the Casino Español, nor built-in propinas. The dining room was lovely. The food was very good.

And, there is nothing pinche about the place, except there may be some working in the kitchen.

Could be there's live music only on weekends, but you'll never know, unless you call them to find out.

Description in full in the next episode.

Tancho, I've never paid anyone to perform elsewhere, although I've been tempted.

I just grin and bear it. It's a small price to pay for the many benefits we have living here.