In the Autumn of 2009, the Restaurant Cha Cha Cha (C3) in Pátzcuaro, closed its doors. Last Winter, rumors flew that Rodolfo, who operated the restaurant at the Gran Hotel on Plaza Chica, had taken over the C3 premises and with his wife, Lupe, as Chef, would reopen the restaurant with a new name and menu.


Hopes bloomed in expat hearts that Lupita's, as the place is named, would fulfill their expectations for a new, pleasant dining spot in Pátzcuaro.
We have had lunch there twice now, and I had breakfast once with the R.O.M.E.O. breakfast group. I think I can now review it in a reasonably fair manner. I have firmly decided not to compare it with C3 which would be fraught with pitfalls.
The first occasion was about a month ago, within two weeks after Lupita's opened. We went with friends Shirley and Ernie and had a nice lunch. The patio setting is bright and simple. The management is redecorating the rooms and patio. The patio has umbrellaed tables to shade diners from the sun.
Several popular and experienced waiters from the Gran Hotel Café came over to Lupita's with Rodolfo.
On our first visit, we were brought some warm tostaditas with tinga de pollo, shreddded seasoned chicken, as an amuse-bouche, which was nice.
There ws also a basket of warm, garlic type bread, which unfortunately was soaked in excessive melted butter. It was much better on our second visit. No amuse-bouch on our second visit last Friday. 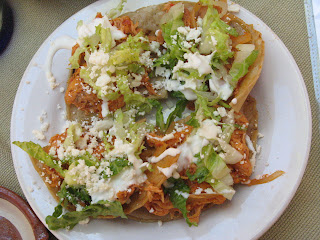 We ordered a jarra of agua fresca de papaya, and it was heartening to see that it was made of fresh fruit with lots of pulp, and not from some concentrate. 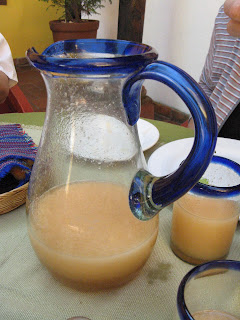 We ordered a wide variety of plates. Doña Cuevas requested the Ensalada Lupita; Shirley, Hamburguesa y Papas Francesas; Ernie and I both Mole de Pollo Especial Lupita's.
La esposa and I both started with Sopa Tarasca, which is for me a sort of creds check for local restaurants. Let's start with there. Let the analysis begin!
The Sopa was attractive, with the requisite strips of chile pasilla, totopos and crema. I don't recall any sprinkles of cheese, but that's not a necessity.
We enjoyed the Sopa, but it was not in my Top Ten Tarascas of all Time for me, due to a very noticeable taste of Knorr-Suiza beef base. (O.k., I use that at home, but I pay less for my own, informal cooking.) Also, there was no puree of frijól, which for me is the foundation of a good Sopa Tarasca. We can take up that controversial subject another time. 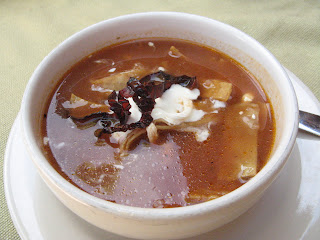 The main courses arrived in good order. Shirley reported her hamburger to be fine, and "just like those frozen patties from Costco." Probably was purchased from there, in my suspicious opinion. (I use the same at home, and they are o.k.; but not in the same league as a hand-patted burger made from freshly ground meat.) The hand cut fries were small but good. 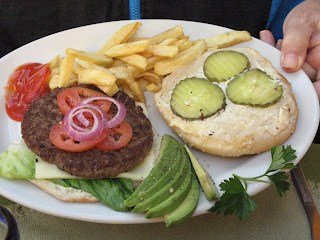 Doña C's Ensalada Lupita turned out to be a sort of yácata of diced chicken, jícama, granos de elote and such, bound with mayo. She says it was o.k. but bland. A dab of the salsa casera of chile perón sparked it up. 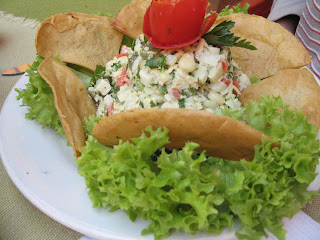 The Mole de Pollo was impressive; a brick-red pool of mole with a chicken breast (you can choose which part you prefer) flanked by a golden field of excellent Sopa Seca de Arroz. There was a lot of the rice, and it was among the best I've eaten anywhere. 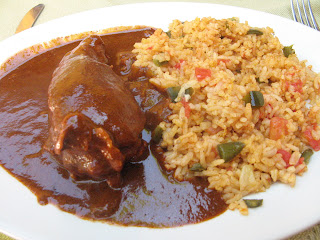 The Mole itself was sharp, and redolent of cloves, cinnamon and chile. It was not a sweet, chocolatey mole. I do prefer the less sweet, more picante moles. This one was emphatically sharp. The cloves had been applied with a heavy hand. The chile component was good, but gradually mounted into a fierce burn. I'd been under the impression that a good mole should not taste any single component, but should blend harmoniously into one whole taste experience. The Mole at Lupita's was a tasty and spicy dish, but one that failed the harmony test.


We passed on dessert, nor were we even offered coffee or dessert.
I don't recall the exact bill, but it was reasonable.


We went back last Friday with our friend Larry R, and we invited Dan to sit with us.
This time I ordered a Margarita to compare it with the potent $70 pesos Margaritas we'd enjoyed at C3. (o.k. o.k; I know what I wrote!) Lupita's are only $40, and come very close to the C3 Margs. The essential effect is the same, and it tasted fine. Mi media naranja had a limonada made with agua mineral.
We noted that the English version menu (I would have preferred a Spanish menu, but they were already at our places when we arrived.) had Fish Filets Battered and Fried with French Fries. Loosely defined, that's Fish 'n Chips, so both la Doña and I ordered those.
Amigo Larry requested the Pasta a La Carbonara, having recently enjoyed a creamy basil pesto pasta. He liked the Carbonara, too.
I think Dan had breakfast. Eggs, and so forth.


The Fish and Chips were fine, the fish itself cut from mero and not from tasteless, watery tilapia; nicely battered and fried; the fries were good hand cut papas; and a creamy, emulsion sauce flecked with dill was a pleasant surprise. There was also a cruet with vinegar for sprinkling on the F&C, estilo Inglés.


In the pure interests of research, I ordered Pastel de Zanahorias, with an orange sauce, which turned out to be a blackberry sauce. It was good. The café Americano was fine, if a bit flecked with grounds. If I recall correctly, our bill for two was about $280.


(Although we asked, the Comida Corrida was not available until about 2:30, which is a bit odd. We read somewhere that it's a good value. I hope to try it before long.)


Here's the score, after two comidas and one Men's Breakfast (which was fine, although nothing of that stands out in my memory.)


Overall, Lupita's is a very pleasant restaurant for a comida or a breakfast.
It has the potential to develop a clientele if it can do some dishes that are beyond the usual for Pátzcuaro.

View Pátzcuaro's Best Eats in a larger map
Posted by Don Cuevas at 6:44 AM

Very nice restaurant. My wife and I have been there three times. We ordered the comida corrida every visit. It´s the same price exactly as the wildly popular gas station restaurant on the highway to Morelia. However, Lupita´s does it better, mostly due to the little extras. Plus, the included dessert is far superior to anything I´ve ever seen at the Pemex. To be fair, Lupita´s comida corrida options are far fewer than the gas station´s.

The service, which is excellent at the gas station, is also excellent at Lupita´s, and the surroundings are far superior.

We will return to Lupita's another time, but later in the afternoon, for the comida corrida.

IMO, the wildly popular gas station restaurant has lost considerable luster in the last year or so. Why, I don't know.

I am going to try to get up your way next week. Lupita's looks like a good place for me to sink my teeth into.

The first meal we had there we were the only ones, the dinner was decent but services was haphazard.
The second experience was their comida corrida and had a few more people. Service was about the same, but then I guess you don't expect attentive service in most places. What I did notice that it seemed that their was a management void, at both times and very little team focus since both times the meal was ready and sat awhile letting it cool substantially.
Time will tell.

Tacho: I think you were at some other Lupita´s, maybe in Morelia. Check out the door next time. You clearly were somewhere else. Lupita is a common name.

Of the three times I´ve been to the Pátcuaro Lupita´s, there near the Basilica, the service was fine. The owner was at his duty station by the cash register.

Do you eat on Mexican time or are you still eating at the strange Gringo schedule? Perhaps that is the problem, like going to a Denny´s up north for lunch at 4 p.m. when most of the staff is out back smoking.

Huuum..You may be right Felipe. I probably entered the old CCC building and the employees brought me back into the Twilight Zone.
Haven't found the Lupitas in Morelia yet, but now I will start looking for it.
Our lunch is usually around 1, and lasts to about 2:30 sometimes longer when the service is extra fast!

I must confess that this blog post was slightly mistitled. The restaurant of the review is actually "Restaurante Lupita's", without the definite article "La".

In Morelia there are 3, as far as I know, "Cenadurías La Lupita". There is a really old looking supper place on C/ Guerreo, between Abasolo and Galeana, I think; the popular and colorful, more modern version on Sanchez y Tagle; and the Big Buffet Cenaduria La Lupita on Av. Camelinas, near Cinépolis Plaza Morelia.

None of those have any connection to the Pátzcuaro Lupita's, to the best of my knowledge.

Oh I like the Big Buffet Cenaduria La Lupita on Av. Camelinas, near Cinépolis Plaza Morelia.
In addition to the buffet they have beer included. The only sad thing is that they took out the great art that they once had in the Men's Restroom. I guess they got too many political correctness comments....

Tancho: I don´t know what the artwork in the men´s room was, but you can rest assured it was not removed due to political correctness. It was something else, surely.