Today, a Pretzel in New York; Tomorrow, your Margarita!

~This is from my Private Reserve Blog, reposando until the right moment. No blog shall be released before its time.~
Warning: reading this blog may be hazardous to your health. 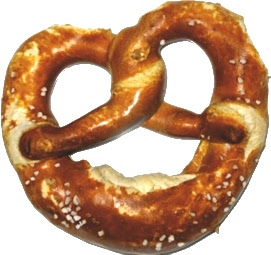 (A few months ago)
I was reading the New York Times Online, and I saw that the health puritans of New York City's Bloomberg administration once again wish to impose their dietary restrictions upon the citizenry. After making smokers into pariahs; eliminating trans fats, (but inconsistently), they now want to reduce the salt intake of the citizens. What's more ominous about this effort, is that this time, they hope to influence U.S. food processors/manufacturers nationwide to reduce the salt content of their products.
Story.


Will there be salt inspection checkpoints at the New York City lines?
This next one may alarm our friend Felipe. Note the desperate, salt-craved look on the Subway customer's face, desperately clawing the glass case. 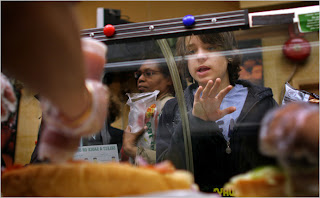 Please don't get me wrong. I think reducing one's sodium intake is a good idea. I have seen the terrible effects of strokes, and I'm strongly in favor of prevention. I only disagree with having our personal dining choices mandated by a city council with apparently nothing better to do than to interefere with our free choice to smoke, to eat fats and to ingest salt.
I mean, REALLY! We're not talking hard drugs here.


But, I'm not worried. It can't happen here in Mexico. Here, we have the freedom to eat all the fat and salt laden comida chatarra (junk food) we want, anytime. A bag of salty snacks and a soft drink are a cherished snack combination for many Mexicans. One can even eat the crappy food of your choice while riding unhelmeted on a motorbike. That's true freedom. Only in Mexico.

(Oh, but smoking in most public places was banned in Mexico City last year. Surely they wouldn't infringe on our freedom to eat unhealthy foods??)


Can you imagine a michelada or a margarita without a salt rimmed goblet? Barcel and Sabritas would have to go out of business.


Citizens of New York! Hear me! Guard your freedoms, because the next step will be to ban the salted pretzel or bagel. What about Kosher chickens or meat, which are heavily salted to remove the blood? Will a religious exemption be made? (I can see the ACLU getting involved in this.)


You'll never miss your bad eating habits until they are taken away.


ALARM! ALARM! ALARM!
UPDATE: Yesterday, I read on mouthfulsfood.com, a foodie forum, that NY State Legislator Fritz Ortiz has introduced a bill in the Assembly to prohibit restaurants, state wide, from using ANY salt in their food. I think restaurant customers will still be permitted to salt their food, at least for a while. How nice.
(But I'll bet that their names will be recorded and they'll henceforth be secretly followed and watched. Eventually, they'll be interned in Dietary Re-Education Camps.) It's for their own good.


What happened to the right to vote? Throw these imbeciles out of office.


As for me, I've decided that upon my demise, I'm going to be pickled in a nice salt brine, spiced in the style of pastrami.
Posted by Don Cuevas at 4:43 AM

You neglected to mention that while you are riding unhelmeted on your motorbike, eating junk food, you can also be talking on your cell phone, or to one of the other three people on the motorbike.

By the way, helmet laws are an abomination.

Felipe, thanks for fleshing out a few details I overlooked.

Don't miss the "Read More" link toward the bottom, which opens an update to the story.

Absolutely insane! Speaking from a libertarian's view - well no better not...

Some day some one will unearth these blog notes, or perhaps they are being already ingested in the NSA computer recognition database and we will all pop up on the screen as subversive demons, complaining about the politically incorrect unsocial actions we did in the better years. Between riding in the back of pickup trucks to helmet-less days on the motorcycles to complaining about saltless pretzels and margaritas.
It is amazing how correct Wells' book was, only 20 years to early. I read it again last year and it is spot on. But it will arrive, and in 50 years they will say we were all socially immoral for allowing diverse options to be expressed. They will keep on their progressive track until only drab grey uniforms will be available.
I need to remember where the Hemlock is...... or just sign up for the Soylent option, remember it was 2022 when that was portrayed in NYC. Or on the other hand why bother, the end will come in 2012, so eat all the salt you want and drink all the hooch you can handle.....

Light fuse of firework and don't get away quickly.

Going out in the rain without your rubbers. (Heh heh)

Thanks for posting this. I do watch my salt but at the same time am a believer in all things in moderation. This might be one of the most inane pieces of legislation that I have ever seen. You cannot cook without at least some salt. Bagels need salt. Bread dough needs salt. And then there are pickles, and corned beef, and salt cod...

Rather than ban an ingredient that has been an integral part of food and cooking since the beginning of time, how about focusing on the legitimacy of high fructose corn syrup? If ever I wanted to legislate an ingredient out of production, that would be the one...

p.s. I use butter too. Oh yes, on occasion, sugar. Chocolate too, when necessary. I don't do oreos, though. ;-)

I appreciate your comments, Cristina.
I agree about HFS.

PS: We do Oreos on occasion.

that pretzel made me hungry-and i just had breakfast. our 2 sons moved to the east coast last summer. the younger one to nyc. when he was here earlier this year he raved about the food in nyc. i can't wait to visit to get some of the delicious foods we just can't get here. ever hear of pepperoni bread? i'll be eating some of that in south jersey where our other son is living.

hubbie and i are trying very hard to eat healthy. i gave up using salt in my cooking a while ago unless it's something that really needs it. he is more the salt lover than i so he could add it to whatever he wants. i remember the very first time i cooked him a big cuban meal. the first thing he did was put salt and pepper on my frijoles negros. i was a bit surprised that he would do that without even tasting it. turns out his mom cooked very blandly so that's what he was used to doing. one cuban meal and as they say, "the way to a man's heart is through his stomach", and we'll be celebrating 29 years of marriage this august. still hopoing to make it to patzcuaro for our 30th.

have a great day!

Hola, Teresa,
Pepperoni Bread? Sure, pepperoni slices wrapped in dough. There's something similar in Asturias, Spain called "bollo preñao, or pregnant bun, made with chorizo. It's the Asturian version of "a bun in the oven". He he.

Here in Mexico, there's choripan, same thing, only different. Just about anything can be wrapped in bread, but it's hard to make good bread without salt. Thus, the circle closes.

I am sending it to some friends ans also sharing in delicious.
And certainly, thanks to your sweat!