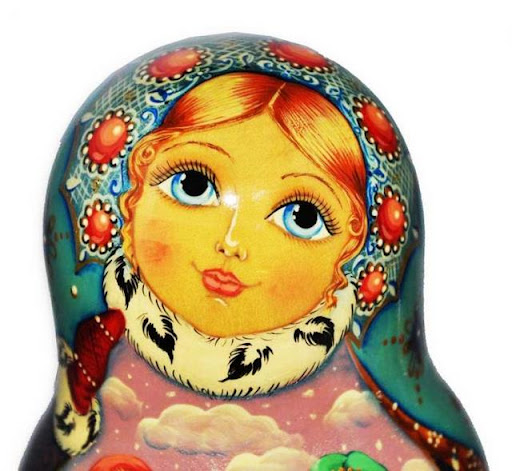 Babushka:
A woman's headscarf folded into a triangle and tied under the chin; worn by Russian peasant women. Also, a grandmother.

Now, Mother Russia has come to Livingston, NJ in the new, Babushka's Russian Deli, conveniently located (and associated with) Livingston Bagel and deli, a couple of doors west.

The store is packed with amazing and delightful delicacies, both imported and domestic. I have have been there four times in just over a week, exploring the myriad bottled, canned and fresh foods. Moreover, the prices are very reasonable.

Among the highlights are the variety of pickled mushrooms, relishes and conserves. I admit to not having tried any yet. 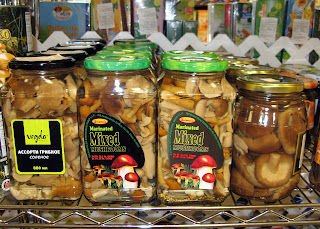 But I did try kvass for the first time, and of the three kinds I sampled, I liked two. Kvass was originally made from an infusion of fermenting black bread heels. Olga Snyder, the friendly owner-manager, who was kind enough to allow me to take pictures, also pointed me to jars of kvass concentrate from which one can brew kvass at home. 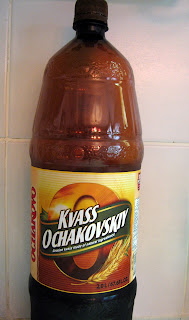 I also purchase a lot of canned smoked fish, especially sprats, a sort of small, smoked sardine that we love. The prices were amazingly low. 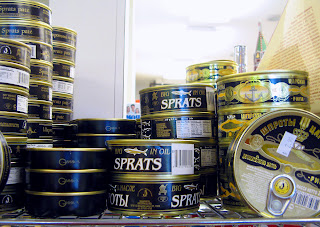 A highlight of the store is the deli meats and cheeses case. I was offered samples of a coarsely cut, heavily smoked Russian style salami, as well as some garlicky pork roast. Close by is a smaller case of salted, cured and smoked fish. We enjoyed some delicate, white sliced smoked escolar. (Next door, the Livingston Bagel deli case has more and different smoked fish, as well as great looking herring.) 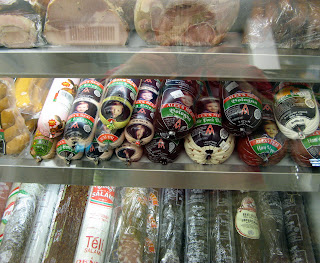 Over in the dairy case are various yoghurts and kefirs. I did buy some Amish Brand organic kefir, which is a thick, clotted creamy dairy product.

There are prepared foods, to go, as well. An appealing salad is "lobio", made of red kidney beans, walnuts, cilantro and garlic. 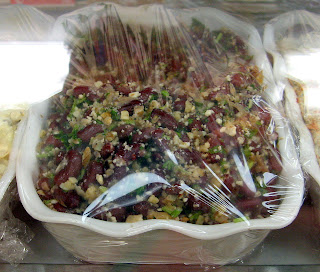 I started emailing Tancho about these foods, as he is of Russian ancestry. We covered kvass, pelmeni (boiled meat filled dumplings), piroshki (fine pastry enclosing meat, fish or cheese), and the intriguing okhroshka, a cold soup, originally based of kvass but now more often made with kefir or yogurt. He sent me his family's kvass recipe. I don't know if I have permission to reproduce it here, so I await word.

One of the original motives for visiting Babushka's was to find out if they had whole grain kasha, which we were unable to find at the nearby Shop Rite supermarket. Baushka's not only has whole grain kasha, it has several varieties, from a golden brown Polish kasha to a very dark, heavily toasted Russian variety. There's even a very large family sized package for about $15. 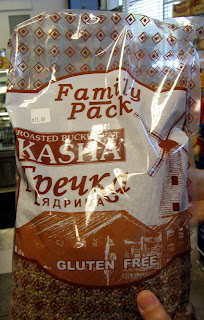 I needed the kasha to make Kasha Varnishkes, a blend of kasha pilaf and bowtie noodles. The recipe follows. 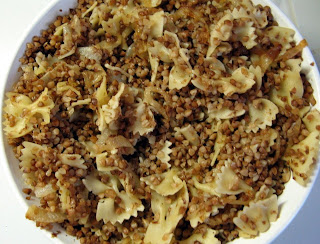 I also improvised a wildly phoney version of okhroshka, by putting chopped cucumber, sweet pepper, onion, pickled cucumber and finely diced salami in a bowl, covering it with kvass, adding chopped fresh dill, then salting and peppering to taste, and topping with thick kefir. It was surprisingly good. 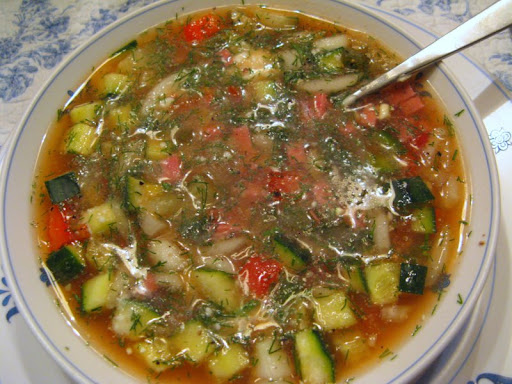 I plan to return at least once more to Babushka's, to get some deli meats to make sandwiches for our flight to Mexico City. I also need more kasha.

To make the Mexico connection, I know of one Russian restaurant in Mexico City, Kolobok, in Santa María La Ribera, but have never been drawn to dine there.

Here's a recipe, of sorts, for Kasha Varnishkes.
Ingredients:

Thinly slice or finely chop the peeled onion.
Cook very slowly in enough oil or schmaltz in a skillet, stirring often, until onions are golden brown.
Set onions aside. Do not wipe out the skillet.

Heat the skillet with the residual oil. Add the 1 1/2 cups of kasha. Stir over low heat until toasty.
Meanwhile, bring 3 cups of water of beef or chicken stock to a boil.
When the kasha is evenly toasted, carefully add the stock.

Bring to a boil, reduce to a low simmer, and cook, covered, about 15 minutes. Then turn offthe heat and leave covered while you cook the noodles.

Meanwhile, in a separate pot, bring 3-4 quarts of well salted water to a full boil. Add the bowtie noodles, stirring briefly to separate. Cook about 8 minutes, until al dente, then drain well.
In a large heatproof bowl, toss the cooked kasha with the cooked noodles, adding the cooked onions. Salt and pepper to taste.
This is usually served as a side dish to meats, such as brisket or pot roast.

More pictures in the slideshow. Clic a pic to go to the larger version.

When are you coming home and resuming the taco talk? We have no way to take advantage of these nice places you're mentioning.

Now there's a good name for your blog that you were looking for, thanks to Sr. Felipe.....
Taco Talk.

Can't wait to taste your Kvass, nice and cold, with couple of raisins bobbing up and down.
In Russia, they have vending machines on the streets dispensing Kvass, only problem is there is no paper cups, just a communal glass....

I may rename the blog the Improvising Kitchen (or Cook).