We were once again at INAM in the process of renewing our FM3s. It was Tuesday and we were weary.

Our FM3s had been delayed due to circumstances which I prefer not to go into here. So during a lull, we retreated to the Auto Lavado/Internet café on the corner, presided over by the affable Sra. Myrna. I did some Internet time, while Doña Cuevas snoozed in a corner.


We were getting hungry, and asked Myrna for restaurant suggestions close by. She mentioned Iguazu, a Brazilian meat-on-a-sword place; and Infierno, a taquería/carnes asadas. She told us that they were within a few blocks.

But I'd noticed earlier a flyer on the counter, advertising the newly opened La Cocina de Betty, and when I asked Myrna and Marí, her hija bonita, they responded enthusiastically. Myrna offered to lead us to it, an offer we gladly accepted. 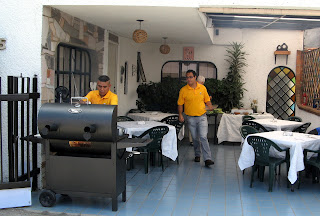 It was just a half block down the street that runs behind INAM and angles over from Camelinas to Ignacio Chávez. A sharp right on the first side street to the right, a cerrada, and we arrived at an attractive casa in an obviously affluent neighborhood.

View Pátzcuaro and Morelia Best Eats in a larger map

Sra. Betty Zamudio herself came out, and with others of her staff (whom I think are mostly family), they explained the program to us. That day, at least, you got a choice of chicken, beef or pork chop, cooked on the charcoal grill. There was a sidebar of salad ingredients and a hot table of guarniciones (side dishes), including a tasty rice, cauliflower fried in egg batter in a tomato and lightly picante sauce, and herbed spaghetti. Spicier salsas were close at hand. The salad table included the usual salad bar items; not a broad selection, but a good one. The broccoli and cauliflower were lightly cooked but served al tiempo, and didn't have that raw green taste I associate with these vegetables. Betty brought out a homemade salad dressing based on flor de jamaica. It was excellent, and neutralized the negative points I'd given the kitchen for the bottled dressings I'd seen.

We were given a choice of two aguitas: mango or melón. We chose the refreshing melón, and a generous glass lasted through our meal.

After visiting the salad table, we started to eat but flies were zeroing in on our table, so we moved inside to a small area where there were two tables.
We hope that the fly situation has been addressed by the owner.
The inside dining room was decorated in good taste. There were but two tables, but it looked as though a third might be shoehorned in.


Almost as an afterthought, Francisco, the grill cook, had asked if we would like soup. His English was earnest but limited and what kind was unclear from his description.

Our waiter brought us a beautiful lentil soup with bits of ham and pork chop. The soup was delicious; the highlight of the meal. We were offered tortillas, but passed. Bread, de horno de leña, is mentioned in the flyer, but was not available that day.

The beef was thin and cooked well done,nice and also tender, seasoned with garlic and black pepper. The pork chops were o.k. and came with two slices of grilled pineapple. Salsas were available near the salad bar. My impression was that you could take and eat all you wanted, except for the meats, all at one price. That price was only $60 pesos a person. An excellent value, in my opinion. 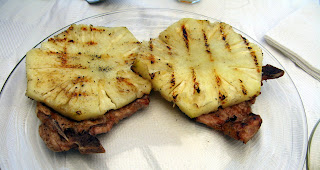 Dessert was optional, at a surcharge of $15 pesos, and in the interests of research, I decided to try the pastel de tres leches. It was obviously homemade, and wasn't bad, but not fabulous, either. There was also a pink blob of gelatin available as well as something that looked like stewed prunes, but might have been figs. 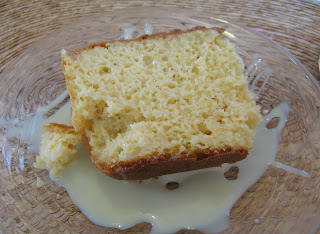 In my opinion, it was not a revelatory gastronomic experience, but an extremely pleasant one and just the right place to soothe your soul and have a nice meal. The price is a very good value. Owner and staff are all affable and charming. After, we also met Sr. Maurilio Flores Garduña, Betty's husband, and Manager of the Restaurante Miralago, at Lake Zirahuen, a considerably more elaborate dining experience. (From what I've read.)

At the time of writing, La Cocina de Betty had been open only a week. We are looking forward to our next meal there.

I recently received an email from Sra. Betty that she was forced to close the little restaurant due to economic considerations. She is hoping to revise her business plan and reopen sometime in the future. We wish her the greatest success.

UPDATE UPDATE: Betty has reopened her kitchen. We were there March 8, but arrived too early to take comida. Service starts at 2:30 p.m. We hope to dine there in the near future.
Posted by Don Cuevas at 8:41 AM

OK Sr Cuevas, de name of the blog? Definitely, the " fork ON the road.! Great review, no fun trying to write a comment while your tongue tries to lick the screen...
Cheers
Dan in NC