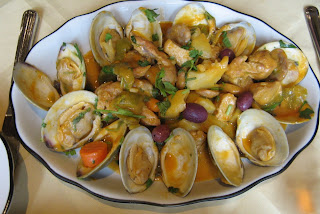 How far would you drive for a special meal? Yesterday, we drove nearly 50 miles from the Oranges, NJ area to Tarrytown, NY, to meet our niece and her husband for lunch.


J, our niece, had suggested that we meet about halfway between their central Connecticut home and our family's home in New Jersey. To tell the truth, they drove twice as far as we did.


I had read something of dining in and around Tarrytown, on the Hudson River, just north of the Tappan Zee Bridge. (Which,it should be noted, charges $5 USD per car going eastward and nothing going westward. I appreciate the gesture.)


After much intensive Internet research, using Yelp!, Chowhound and other foodie sources, I'd focused on the Portuguese and Brazilian restaurant, Sol Mar. Other contenders were Tarry Tavern and Sweetgrass, but in the end, Sol Mar won.


Why? Because I believe that ethnic restaurants can provide honest cooking and are a good value. It's not that I don't appreciate locally sourced, perhaps organic ingredients presented in creative ways. (Well, to be honest, it doesn't excite me much.) But I get more excited by a family operated ethnic restaurant serving specialties of their native land.


Sol Mar proved to be a very good choice. As always, I sought out dishes of which I was unlikely to prepare at home.

But, first, the drinks.
I had a couple of glasses of a delightful Fuzelo Vinho Verde, throughout the meal. It was refreshing, flavorful, balanced and with an impudent effervescence, an attractive sign of its youthfulness. (Hmm?)

My companions quaffed several kinds of Brazilian and Portuguese beers, including one very black brew. At the opposite end of the visible light spectrum was "Sköl", a light, Brazilian lager. It was the only one presented in a can.

For appetizers, we began with an order of Bolhinos do Bacalau, or codfish fritters. They were everything I wished for. Slightly crispish outside and creamy salt cod interior. The salt was present but restrained. 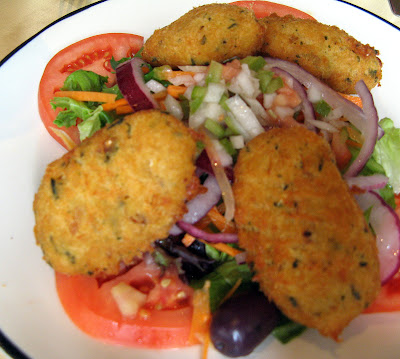 J. had a Portuguese Salad with grilled sardines, a rather substantial affair, spangled with capers. 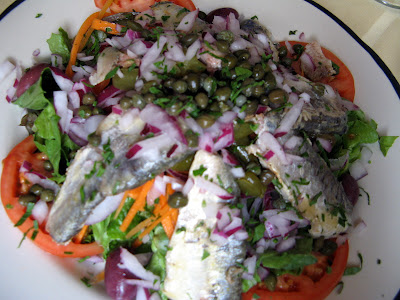 Crab cakes on a menu are hard to resist, and while this pair, served with a sweet red pepper sauce and a beurre blanc were fine, they were overshadowed by the other dishes. 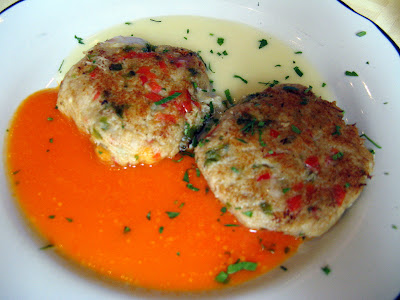 Doña Cuevas made a very wise choice in ordering Grilled Calamari with Sun-dried Tomatoes, a treatment which made a mockery of the ubiquitous breaded rubber bands accompanied by overcooked Marinara Sauce, as commonly served. 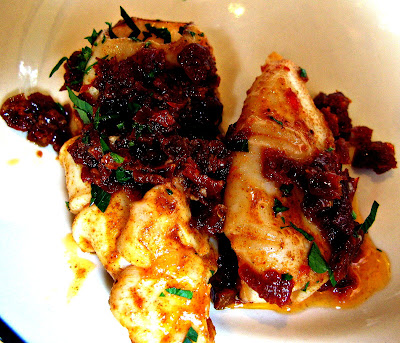 I opted for Grilled Sardines. These were the subject of some controvery on Yelp! or Chowhound. So, like, OMG! Sardines have bones! Yelp! 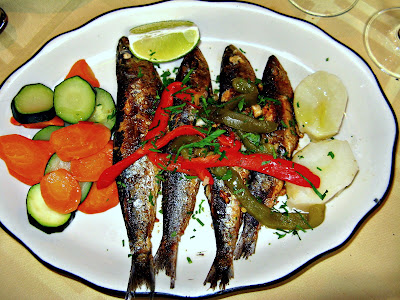 The sardines were pure, simply prepared, and tasted like fresh, grilled sardines should. They were seasoned with a little olive oil and coarse salt, and garnished with a few strips of roasted sweet peppers. Boning them was a snap.


G went all out and got Feijoada, the Brazilian national dish. It's a hearty dish of black beans, pork and choriço, accompanied by rice and a trio of traditional condiments.

Of the five desserts presented on a tray, several looked a little tired, but Alex assured us that we would get fresh portions. He is a sincere and affable young man. two were made in house. They were the "Molotov", a soft meringue striped with a caramel sauce; and flan.

Flan. We have eaten hundreds of flans over the years. They have ranged from terrible to acceptable to pretty good. But the flan at Sol Mar is unmissable, probably the best we've ever had. It's a delicate custard, perfectly flavored, and had a serious burnt sugar top, as it should be.

The Molotov would not have been my choice, as I am not fond of whipped egg white desserts. But this was very pleasant. (I only ate a small spoonful.)

We finished with coffee, an Americano for G and an espresso for me. The espresso came very close to meeting the ideal standards of our absent friend, Ron, El Exigente. 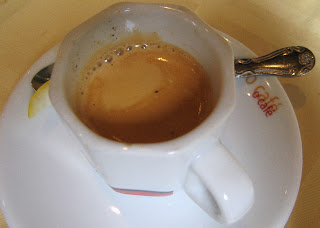 Alex returned with a bottle of Moscatel do Douro and four cordial glasses. We were treated to a drink on the house. I went up to Chef-Owner Senhor Carlos Mendonça to thank him and congratulate him. 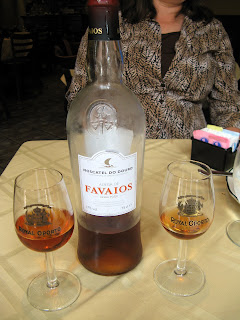 The bill was serious,, but not because the prices are high. The cost was because we'd totally indulged ourselves, enjoying a great meal.

Man those plates looked good! I mean the stuff on the plates look delicious! You are 100 % right when it comes to ethnic restaurants. What we enjoy doing is when we travel away from home, going to an ethnic joint, asking the waiter or hopefully the owner to bring us dinner or lunch, whatever it may be, handing back the menu to him (or her, need to be PC here) and let them make the choices for us. We have never been disappointed and they usually provide us with a better meal, because they want their selections to please us!

Thanks, Tancho. The food, service and people at Sol Mar were great.

The four of us returned for lunch recently, and while it was a pleasant experience overall, a few dishes didn't "work". Notable odd was the Porco Alentejano, which was too salty and hand the jarring element of pickled cauliflower segments.

The desserts were pretty good, but the Custard Tarts had tough crusts.
I would lower the Food Rating to 4 **** and raise the Price Rating to $$$+
(We did have a lot of dishes and drinks.)