When it's cherry blossom time in Orange, New Jersey, we'll make a peach of a pie. 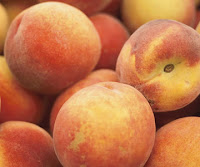 
We’ll make a peach of a pair. I know we cantaloupe
So honeydew be mine..."


A day after arriving at a location somewhere not far from Orange, NJ, my Mom asked if I'd like to make a stone fruit pie. She had a recipe in Better Stones In Gardens Magazine*. I happily accepted the assignment.


Although Mom has, in recent years taken to using a relatively high quality frozen, New Jersey Reddi-Ta-Youse crust, I forged ahead and made an all-butter crust a mano.

The recipe calls for 2 lbs of nectarines, 1 lb of peaches, and 1 lb of plums. We had plenty of peaches, only 1 nectarine and maybe 4 plums. So in my typical, improvising way, I made peach + 1 nectarine pie.
Why waste the plums?

I looked over the recipe, and quickly rejected some of its ridiculous excesses. For example, the first instruction, before preparing the fruit was "Preheat oven to 400º" A few steps later, they have you macerating the sliced, sweetened peaches for an hour. Who's paying the gas bill, and for the air conditioning?

So, basically, we begin with an unbaked, 9" pie crust. Keep it chilled.

Peel the peaches by submerging them in boiling water for a minute, carefully drain, and cool with cold running water.
They should peel easily.

Slice them longitudinally into eighths, and drop into a large mixing bowl.
The recipe called for nutmeg, but while searching the dark, labyrinthine depths of the spice cabinet, I found some cardamom pods, of unknown age. But when I cracked one open and crushed a few seeds, they smelled good. So I cracked open about 5 more pods and put them into a mini-chop food processor along with 1/2 cup of sugar. I also put in a few dashes of cinnamon.
I think the strained juice of half a lemon is a nice addition.
I strained it through my hand.

This was added to the sliced peaches and blended in, folding with a spatula. You can use your hands if you like.

The recipe says to let this sit at room temperature, stirring occasionally. I used the time to make and form the crust.

The next silly instruction was to drain off the juices in a colander, reserving them in another bowl.
Then add 3 TBSPS cornstarch to the liquid, and whisk it smooth. Then add this back to the sliced fruit.
Score: an extra soiled bowl, a wire whip and another strainer. All this to add a little cornstarch. Oy!

Fiddle faddle! Just sprinkle 3 TBSPS cornstarch over the undrained fruit, fold in with your spatula or hand, ¡y ya hecho!


Mom's secret trick to reduce pie runniness:
Crush up a couple of handfuls of corn flakes and spread them into the pie shell. No special tools are needed. I used my hands.

You can, in an excess of masochistic ambition, prepare a second pie crust with which to create an elaborate lattice top, as per recipe. Or you can do as I did; make a crumble topping, also known as streusel.

Directions:
In a medium bowl, mix together the sugar and flour. Mix in butter with a fork or stand mixer* just until the topping is crumbly. Top your pie before baking.

Carefully pour the sweetened, cornstarched fruit into the pie crust.
Distribute the crumb topping evenly over the fruit.

I suggest that the pie be baked on an aluminum foil lined rimmed baking sheet, in case of overflow.

Bake for 20 minutes more and look at the pie. It may be done. The recipe advises a total of 80 minutes, 40 each at the higher temp and at the lower. Use your eyes and your judgement.

Remove and cool on a rack for a couple of hours.
Meanwhile, make the French Vanilla ice cream.
(Just kidding!)

We support the Recipe Liberation Front.

Thanks for the entertainment, the recipe, the gorgeous pics, & for the commentary that is encouraging me to make this, now that it seems as easy as pie.

Yes, what the previous poster said. I second that emotion.
Wish I were there to eat it.
Love,
Wendy